skip to main | skip to sidebar

The Biennial Conference on Chemical Education (BCCE) was held last week at Purdue University in West Lafayette, Indiana. Over 1300 chemical educators who teach at the college and secondary school level attended it. There were over 840 papers, which is a record for that event! This meeting is organized by the Division of Chemical Education for chemical educators to exchange the latest information about the teaching and learning of chemistry at every level K-25. The meeting also consists of plenary lectures given by experts for the whole conference. Experts in chemical demonstrations exchange the latest in demonstration and put on a show for the entire conference. Every evening there is a social event after the evening plenary. The meeting is always held on a college campus and most attendees live and eat in the dorms. In fact even if a person opts to live in a near by hotel you can eat in the dorm because that is where you network with other members of the profession and find out informal information. 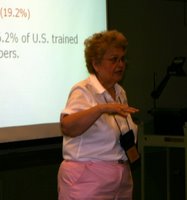 Jeannette Brown and Valerie Kuck (a Purdue alumni) gave presentations in a Symposium entitled " Women in Chemistry Education. Ms Brown's presentation was "The History of African American Women Chemists” Ms Kuck's presentation was "Analysis of the Doctoral Training of faculty members at Research Universities". Both women have done extensive research on their topics and will be publishing books in the future.

<>
Dr. Brandolini's paper was entitled "The Keys to Chemistry: Interactive Web-Based Tutorials". Her paper was about a simple way for students to learn the background information that they need in order to understand chemistry courses. It is intended for college students whose secondary preparation was not up to par, but it is also being used by current secondary students as a tutorial. (Photo caption Anita Brandolini)
Diane Krone and Bettyanne Howson are high school teachers who attend these conferences for professional development to hone their skills. They spent a lot of time attending the demonstration lectures and POGIL workshops. POGIL is Process Oriented Guide Inquiry Learning, a student -centered discovery-based teaching strategy designed to simultaneously develop content knowledge and key process skills such as critical think and teamwork. This method prepares students for working in teams in college and industry.

(Photo caption The Aldehydes and Ketones whop it up)
Just so you know this meeting is not all work and no play. Sunday night there was an ice cream social sponsored by the Journal of Chemical Education, Monday night there was wine and cheese in the exhibit area and Wednesday night there was music and dancing. The music was played by a pick up band of chemists called "The Aldehydes and Ketones". This group was started two years ago at the Biennial at Iowa State University and was such a hit they came back for an encore presentation at this convention. They played music from the 60's and 70's. They had people such as Dr. Glenn Crosby retired chemical educator, dancing along with the younger chemists!

Posted by Jeannette Brown at 11:27 AM No comments:

The North Jersey Section of the American Chemical Society with 7000 members is the largest local ACS section in the Nation. Our members live or work in all the counties of New Jersey, north of the Raritan River, with the exclusion of parts of Bergen County and all of Hudson County. Our members work in industry, teach in colleges and universities, teach high school work in government or are retired. The major industry in is the pharmaceutical industry, but we also work in the electronics, communications and biotechnology industry as well as hospital and government labs.
Our current Chair is Dr. Stephen Waller; he highlights more information about NJACS on the web page http://www.njacs.org/about_njacs.html.
Since we are such a large organization we are divided into topical groups and committee. Our topical groups are: Chromatography, Drug Metabolism, Lab Robotics, Mass Spectrometry, NMR Spectroscopy, Organic, Regulatory and Quality Group and Small Chemical Business. So you can see there is something for everyone. Most of these groups meet monthly in different locations in the area. In addition we have committees; Metro Women Chemists, Minority Affairs, Senior Chemists, Younger Chemists, Education, Teacher Affiliates, and Careers. These committees tend to run programs for their members. Membership in topical groups and committee is free to all ACS members. Members of the general public can attend the topical group meetings without being an ACS member but it is encouraged. The committees welcome new members in their groups. More information about our topical groups and committees can be found at http://www.njacs.org/index.html
Our Careers in Transition Group meets once a month to help members get a new job or get a promotion in their present job. This is a very important group for those who might be laid off from a job or are currently thinking about changing jobs.
The Teacher Affiliate Group is very active. Teachers meet once a month in different locations during the school year at a Chem Tag or Chem Central meetings. This is an informal after school meeting where teachers enjoy refreshments and share activities. Younger teachers are able to get their questions answered about some aspect of their teaching by experienced teachers. The experienced teachers also run workshops to teach younger teachers or alternative route teachers cutting edge techniques for the classroom. They also have a list serve called chementhusiasts to help teachers on a daily bases. More information about our teachers groups can be found at: http://www.njacs.org/teacher.html
Please check the NJACS website regularly for updates and information about the section. We are a very active section and we could use volunteers. If you would like to volunteer contact us on the web.http://www.njacs.org/volunteers.html
Book mark this blog for the latest news about our section.

Posted by Jeannette Brown at 6:11 PM No comments:

Jeannette Brown
Ms. Jeannette E. Brown is a former Faculty Associate in the department of Pre-College Programs at the New Jersey Institute of Technology. She previously held the position of Research Chemist and worked at Merck & Co. Inc for twenty-five years in that capacity. She started her industrial career at CIBA Pharmaceutical Co. as a junior chemist and worked there for eleven years. She has a research MS degree from the University of Minnesota and a BS degree in the Field of Chemistry from Hunter College. She was elected to the Hunter College Hall of Fame for her work as a mentor for young students . She is the 2004 Société de Chimie Industrielle (American Section) Fellow of the Chemical Heritage Foundation. She studied the History of African American women chemist and is currently lecturing and writing a book about her work. She recently received the Ullyott Fellowship from the Chemical Heritage Foundation to work on her book about African American Women Chemists. This fellowship was from May to July 2009. .She is a member of the first class of American Chemical Society Fellows 2009, the only African American woman elected so far.